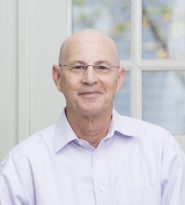 Working with Feinstein Since: 2017
Based in: Portland, OR

Throughout his career, Greg worked to improve food security, humanitarian, and transition programs. Prior to joining Tufts, Greg served as the Acting Assistant Administrator for the Bureau for Democracy, Conflict, and Humanitarian Assistance at the United States Agency for International Development (USAID/DCHA). Prior to that, he served as the Senior Deputy Assistant Administrator for DCHA. Since he began with USAID in 1988, he has held a variety of other positions, including Mission Director in Pakistan and Namibia, Senior Deputy Assistant Administrator for the Bureau of Food Security (helping to plan and implement the Obama Administration’s Feed the Future Program), as well as posts in Malawi, Sudan, Ethiopia, and Kenya. Additionally, Greg taught at the National War College, was a legal protection officer for UNHCR, and was Chief of Party for the Famine Early Warning Systems.

Thank you and farewell to Greg Gottlieb

After four years as the Director of the Feinstein International Center and a lifetime of commitment to public service, Greg Gottlieb is retiring on July 30, 2021. Greg brought passion…

Greg Gottlieb and Harvard Humanitarian Initiative colleagues published a journal article titled, “Humanitarian Training with Virtual Simulation during a Pandemic,” which discusses the use of virtual simulation for humanitarian training…

This study seeks to understand the availability and quality of information, and the external influences on data collection and analysis for the classification of food emergencies.

Feed the Future Uganda One Nutrition in Complex Environments

The One Nutrition in Complex Environments (ONCE) study tests a new way of preventing and addressing acute malnutrition through a cluster-randomized trial.

Multiple calls have been issued for better preparedness, early warning, and, above all, early action to prevent hunger and malnutrition, reduce the scale of food insecurity, improve resilience, and reduce…

2020 Hindsight? The Ecosystem of Humanitarian Diagnostics and Its Application to Anticipatory Action

The nature of humanitarian crises has changed over the past two decades. These changes demand increased anticipatory humanitarian action and improved information to guide that action. The COVID 19 pandemic…