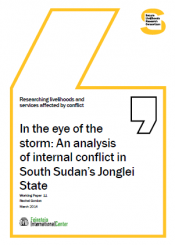 In the eye of the storm: An analysis of internal conflict in South Sudan’s Jonglei State

The violent political crisis that has engulfed South Sudan since mid-December 2013 has awakened the world to the fundamental lack of stability in the world’s newest country. Unfortunately, the situation is neither new nor specific to the political contestations that have so suddenly turned violent across the nation in recent months. This working paper was written prior to the political crisis and subsequent outbreak of violence; its aim is to shed light on the conflict dynamics of one of the country’s poorest and least-analyzed states – Jonglei – through the post-Comprehensive Peace Agreement (CPA) and independence period, leading up to the present crisis.