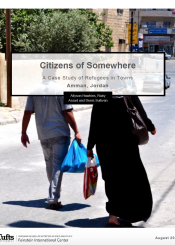 Amman, Jordan: A Case Report of Refugees in Towns

This case report focuses on Amman, which has for years been at the center of prolonged refugee experiences. Jordan has served as a haven for different groups fleeing persecution throughout history, from the arrival of Palestinian refugees after 1948 and again after 1967, to the acceptance of Iraqi refugees in the wake of the U.S. invasion of Iraq in 2003. Since 2012, there has been an influx of Syrian refugees. Recently, Sudanese and Yemeni refugee populations have also started to grow, as has the presence of migrant workers from Egypt, and others from African and Southeast Asian countries.