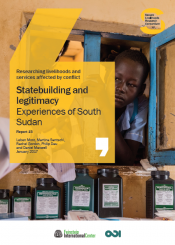 In 2005, the Government of Sudan and the Sudan People’s Liberation Movement / Army concluded a peace agreement, formally ending the 22-year-old civil war. Following a referendum, South Sudan seceded; donors put billions toward the new state and Sudan’s recovery, supporting – among other things – the development of new state institutions for both countries. However, in December 2013, war broke out again in South Sudan.

Prevalent approaches to state building – such as those employed in Sudan and South Sudan from 2005 to 2013 – focused mainly on infrastructure and bureaucracy, based on the underlying assumption that service delivery fosters state legitimacy. Recent research, however, questions this assumption, arguing that it ignores the role that political structures, ideas and history play in legitimization or de-legitimization of the state.

This report uses South Sudan as an example to interrogate people’s perceptions of the state, asking what – if not service delivery – fosters state legitimacy.

This research was conducted under the Secure Livelihoods Research Consortium (SLRC), a six-year, eight-country research study, led by the Overseas Development Institute (ODI) in London. SLRC investigates livelihoods, access to basic services, and social protection in fragile and conflict-affected situations. The research is funded by the UK Department for International Development (DfID), Irish Aid, and the European Community (EC).  The Feinstein International Center leads SLRC research in South Sudan and Uganda in addition to its participation in the Sierra Leone research.