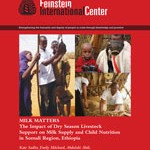 Children in the pastoral areas of Somali Region Ethiopia are increasingly among the most nutritionally vulnerable populations in the world. In response to more frequent droughts and recurrent nutritional emergencies in the Region, the international community has tended to prioritize the provision of food aid and therapeutic treatment of severe acute malnutrition; Little has been done to understand the potential role of milk, a well-established pillar of the pastoral diet and one of the world’s most nutritionally complete foods, in maintaining child nutritional status.

This report presents the findings of two cohort studies assessing the impact of small-scale livestock interventions, designed to sustain access to and availability of animal milk at the household level over the dry season, on the nutritional status of children under 5 years of age. The studies were conducted for one calendar year, July 2010 to July 2011, in two pastoral Zones of the Somali Region. The results reveal that, in sites exposed to the intervention, animal milk off-take improved dramatically, child consumption of animal milk increased, and child nutritional status stabilized compared to that of children in the control sites. Moreover, the direct costs of the livestock interventions were found to be 45 to 75 percent less than those incurred through therapeutic feeding programs, and the benefits were found to extend beyond nutrition to include developmental, health, and livelihoods aspects. The study represents the culmination of four years of investigative research into the role of milk in pastoral child nutrition and a call for new, holistic, and preventative approaches to addressing child malnutrition in pastoral region.