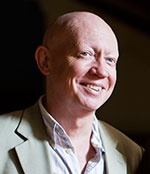 Peter Walker was director of Feinstein from September 2002 to mid-2014. Peter has been active in development and disaster response since 1979, and he has worked for a number of British-based NGOs and environmental organizations in several African countries. In addition, he has been a university lecturer and director of a food wholesaling company.

In 1990 Peter joined the International Federation of Red Cross and Red Crescent Societies in Geneva, where he was Director of Disaster Policy for 10 years before moving to Bangkok as Head of the Federation’s regional programs for Southeast Asia. He has traveled extensively in the Middle East, Africa, Eastern Europe and the Former Soviet Union, and has published widely on subjects as diverse as the development of indigenous knowledge and famine early warning systems, to the role of military forces in disaster relief. Peter was the founder and manager of the World Disasters Report and played a key role in initiating and developing both the Code of Conduct for disaster workers and the Sphere humanitarian standards.

The ultimate goal of The Assessment Capacities Project (ACAPS) is more effective, efficient, and appropriate humanitarian responses to crises. The aim is to achieve this by promoting better-informed and more evidence-driven responses, specifically by supporting a process of coordinated needs assessment which is timely, coherent, and appropriate to context, with results that are accessible and relevant to decision makers.

This study was intended to compile the evidence base for improved practices by humanitarian agencies to mitigate the risk of corruption in humanitarian assistance. Case studies were conducted in seven disaster zones.

According to the Hyogo Framework for Action, disasters affect over 200 million people annually, causing significant loss of lives, forced migration, and disruption of livelihoods and institutions. The trend over…

This paper reports the results of a study undertaken during 2012 by Tufts University for the Assessment Capacities Project (ACAPS), as part of the latter’s “Operational Learning” strand of work….