Sabina’s career focuses on putting disaster-affected communities at the center of disaster response. She participated in the 2010 earthquake and cholera responses in Haiti and the Ebola response in Guinea in 2015 with IOM. Since 2010, she has worked on community-driven peacebuilding efforts in gang-affected areas of Port au Prince and consults with a number of Haitian organizations. Sabina has a bachelor’s in Community Health and Peace and Justice Studies and a master’s in Food Policy and Applied Nutrition from Tufts University. She also has a master’s in Community Change and Applied Peacebuilding from the Future Generations Graduate School. She is pursuing a PhD in Food and Nutrition Policy and Programs at the Friedman School at Tufts. 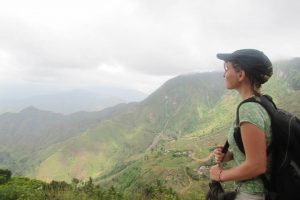 On January 12th, 2010, a magnitude 7 earthquake struck Haiti. This resulted in hundreds of thousands of deaths, millions of people displaced, and an unprecedented challenge for the humanitarian community. It also provided Sabina Robillard with experiences that shaped her understanding of her place in the humanitarian system.

At the time, Sabina was an undergraduate at Tufts, studying Community Health and Peace and Justice Studies. She was also close with the Haitian Diaspora community and semi-fluent in Haitian Creole. The day after graduation, Sabina boarded a plane to Port au Prince to support a post-earthquake initiative through Tufts that aimed to create a platform for Haitians to voice their needs and priorities to humanitarian responders. A few months later, after helping to successfully integrate the platform into a Haitian platform, she joined the United Nations’ migration agency (IOM), who was responsible for managing the thousands of camps that housed millions of displaced Haitians.

Sabina spent a year working at the heart of the international humanitarian response to the earthquake and learned a great deal about how the system did and did not work. She was most struck by the fact that local actors were excluded from the international response planning and implementation. Most of the UN agencies were housed in a sprawling, walled-off Logistics Base (known as LogBase) next to the airport. Every week, the UN hosted coordination meetings to organize who did what in the response, with representatives from other large international NGOs, who drove into LogBase from their own walled-off compounds. The meetings were almost all in English, and one had to have a non-Haitian passport or a connection to the international agencies to get into LogBase. Sabina once had to sneak a Haitian community leader into LogBase for a meeting by having him hide in the back of a friend’s LandCruiser. Her friend had important information about camps that had been overlooked by the response and his meeting with someone in the WFP mapping department got the camps recognized for the first time.

All of this had important impacts on aid, public health, and nutrition. By excluding Haitians, international organizations would never be making evidence-based decisions because they did not know enough about Haiti to ask the right questions. This disconnect led to poor outcomes in the cholera epidemic, to food aid being misdirected or misused, and to distrust and even hatred of aid agencies among Haitians.

Sabina eventually transitioned to work with grassroots Haitian organizations, primarily in a gang-affected area of Port au Prince and in conservation efforts in the countryside. Through this work, Sabina realized that the underlying factor driving everything from deforestation to gang violence was a lack of sustainable livelihoods—the way that families make ends meet, put food on their tables, and meaning in their lives. Recalling work from the Feinstein International Center that she read as an undergraduate, Sabina realized that she needed more training to successfully understand and advocate for better humanitarian response, conservation, and violence reduction in Haiti.

Sabina has seen time and time again that the ability of a family to feed themselves, and the success of interventions meant to help them, so often depend on how power is structured in a community. When a family turns to a gang leader instead of an NGO when there is nothing to eat, when a family cuts down trees to feed their children, these both are the causes and effects of big picture issues like governance, conflict, and climate. Feinstein is one of few places that has the practical and academic strength to hold all of these complexities and allow Sabina try to make sense of them. She is currently working with Dan Maxwell on research about the localization of humanitarian assistance – in essence, an agenda to reverse the exclusion of local groups from international humanitarian response structures that she saw firsthand at the LogBase in Port au Prince. This research has included building an interactive database of articles on the topic, advising a meeting of donors chaired by the Gates Foundation, and coordinating a field research project with Oxfam America in three countries. This project is only a small part of the work needed to increase the power and influence of local actors when a disaster strikes. It is crucial for further work to include the voices of people most affected by humanitarian crises and those at the margins of humanitarian response. With funding, Sabina hopes to pursue her own research that questions current practices, systems, and assumptions based on the lived experiences of local actors. Sabina would like to work with different types of communities to document how they organize themselves in the face of crises and explore how external assistance can more effectively and equitably support affected populations.

Sabina’s work on localization of research and programmatic interventions has the potential to help challenge the power structures that continue to undermine effective humanitarian assistance. The Feinstein International Center is seeking support for young scholars like Sabina who have unique skillsets to pursue their own hypotheses on critical global issues. With support, these young scholars can push the humanitarian field forward by promoting the use of evidence and localized research rather than imported assumptions in operational and policy responses to crises.

“I care immensely about the work that I do and its value in the world. These are peoples’ lives, their livelihoods, their children’s health, and their future. If we do not approach this work thoughtfully with full consideration for the humanity and agency of the people we work with, we can inflict real damage. But if we can do it well, we can make real, positive, and lasting changes” -Sabina Robillard

Sabina is one of Feinstein’s Young Scholars that we are seeking funding to support. Learn more about Sabina and her research here.