Merry has spent more than 20 years in the humanitarian field working her way up to leadership positions specializing in food security and livelihoods. She worked with a variety of agencies, including the International Rescue Committee, GOAL Ireland, Food for the Hungry, and World Concern. She holds a B.S. in chemistry from University of North Carolina at Chapel Hill, an M.B.A. with a concentration in international development from Hope International University, an M.Sc. in food policy and applied nutrition and a Ph.D. in nutrition from the Friedman School of Nutrition Science and Policy at Tufts University. 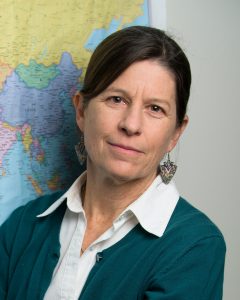 As a humanitarian leader designing and implementing responses in complex crises, Merry continually had to make critical decisions based on assumptions rather than evidence. When the conflict in Darfur spilled over into eastern Chad in 2007, large organizations and UN agencies decided to shift humanitarian support from the southern farming regions to the northern desert pastoral regions. When Merry questioned this shift, the response, based on driving through camps without any conversation with refugees, was because those in the north had fewer resources to support themselves. Using her understanding of livelihoods, in just a few hours Merry was able to gather evidence to show that the pastoralists in the north had retained their herds and significant mobility, while the farming refugees in the south had no access to land to pursue their livelihoods. Merry often depended on the Feinstein International Center’s (FIC) reports while directing projects around the globe to make more evidence-based decisions. For example, when trying to understand why malnutrition was increasing in a group of villages supported with food security programs in Darfur, Sudan, FIC’s seminal report, Livelihoods Under Siege, provided clear insights into the relationships and dynamics that could not be obtained from a quick assessment. Through this and other similar experiences she came to admire Feinstein’s practical, high-quality, and evidence-based reports that helped her increase the effectiveness of the programs she was directing.

In 2010 Merry left the world of humanitarian program implementation to earn a PhD so that she could help build the evidence-base for humanitarian programming and change the way that decisions are made in the field. The Friedman School of Nutrition Science and Policy at Tufts University was the natural fit for her. Friedman is one of the few schools where nutrition is considered from the macro international systems and policy level down to the micro level of individual cells in the body; and the Feinstein International Center is perhaps the only place where this broad nutrition focus is coupled with research on humanitarian contexts.

Merry brought to Friedman her long experience in humanitarian work and her solid understanding of the social, agricultural, and economic dynamics that lead to and sustain food insecurity. Friedman taught her the biological understanding of nutrition, which gives her insight into how specific deprivations from food insecurity affect the diet and the body. Her work with faculty at the Feinstein International Center added an understanding of how to do robust research in difficult environments. With Feinstein she conducted research on the Somalia famine, resilience, and livelihoods in Darfur, Sudan. Today, she is the international research team leader on the Taadoud II Transition to Development program in Darfur, Sudan under the guidance of Professor Helen Young and she is the Primary Investigator on the Budikadidi program in southern DR Congo.

Merry’s combination of skills and experience is very uncommon and yet is key to understanding the root causes of kwashiorkor, a deadly type of malnutrition. While conducting dissertation research in a small group of communities in Central Africa about one child a week was dying of kwashiorkor. Treatment was available in a nearby hospital, but it was beyond the families’ means. Merry’s first-hand experience with the toll kwashiorkor can take on communities provides her with a personal drive to prevent such cases from developing in the first place. Kwashiorkor appears only in the poorest, most food insecure populations, and is severely exacerbated by conflict and natural disasters. Globally, it is estimated that hundreds of thousands of children are affected by kwashiorkor annually. Its cause is still unknown and there are no strategies available for preventing it. Since the 1980s, there has been little research on kwashiorkor. What has been done mostly focuses on its medical aspects. While medical research can lead to a better understanding of the biological side of kwashiorkor, it will not lead to prevention. The field needs research on the dietary, cultural, and socio-economic conditions that lead to kwashiorkor’s development if we are to prevent this disease that disproportionately affects the poorest people in the world.

Merry’s Ph.D. research focused on this relationship between the biological and the environment. She spent months in a group of communities, talking to mothers of children at risk of kwashiorkor, getting to know their constraints, childcare habits, and their desire to keep their children healthy. The research was able to bring light to the peculiar way that kwashiorkor cases cluster in specific communities, social drivers of malnutrition, and the lack of a specific amino acid that may change the way we understand the metabolic changes leading to kwashiorkor. Today she is continuing to study the etiology of kwashiorkor malnutrition in order to design preventive interventions in extremely low resource settings and biomarkers to indicate the early stages of kwashiorkor. At the same time, she continues to work with Feinstein faculty and gain experiences with seasoned researchers with interests complementary to kwashiorkor.

The Feinstein International Center believes it is critically important to deepen the research on kwashiorkor and knows that Merry has the unique combination of skills, experience, and passion needed to push the field forward. The primary barrier to fulfilling this potential is financial. After compiling donations from more than 200 sources, Merry was able to conduct initial research on kwashiorkor with some very new and interesting findings. With a limited amount of funding, Merry would be able to dedicate more time toward research on kwashiorkor, allowing her to establish herself as a nutrition researcher specializing in kwashiorkor. With support, Merry has the potential to uncover the evidence that would make a difference to thousands of lives each year.

Merry is one of Feinstein’s Young Scholars that we are seeking funding to support. Learn more about Merry and her research here.