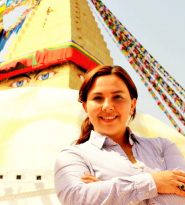 Sharon Granados Mahato is a social geographer who specializes in international migration with an emphasis on multiculturalism, human rights, organized crime, and territorial & urban transformations.  Sharon has dedicated her career to the protection and defense of the human rights of Latin American migrants, refugee seekers, victims of human trafficking and migrant smuggling, and those who have been forcibly displaced by organized crime and climate change.

Her experience working as an expert advisor for the United Nations Special Rapporteur on the Human Rights of Migrants has enabled direct contact with the most vulnerable population in cross-border zones, areas devastated by violence and conflict, and places of extreme poverty in Central America and Mexico. Sharon’s experiences span from investigative research, to international relations, and NGO leadership. Working with human rights for immigrants has given her the opportunity to represent the Central American region in global debates, campaigns, and international initiatives. Sharon leads research on historical and contemporary migratory dynamics, forced displacement, and international protection of refugees in the Central America corridor.

Sharon holds a B.A. in geographical sciences with emphasis on land use planning from Universidad Nacional de Costa Rica and an MSc in urban development from the Pontificia Universidad Católica de Chile. She is a native of Costa Rica.

The East Boston report explores a rapidly changing neighborhood that is being transformed both by immigration (largely from Hispanic populations), and by gentrification including the skyrocketing cost of rent, particularly along certain streets.