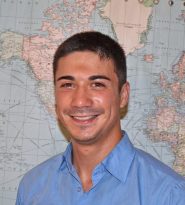 Working with Feinstein Since: 2017
Based in: Medford, MA

As a visiting fellow, Charles provides research guidance to the Refugees in Towns (RIT) Project. Previously, he was the Program Administrator of RIT, co-leading this global participatory study on refugee integration. In this role, he developed the project’s methodology, case studies, and developed and managed relationships with local researchers and a network of expert advisors.

Charles has expertise in social resilience, migration policy, urban studies, and qualitative field research. Prior to joining the center, Charles was Assistant Director of the Boston Consortium for Arab Region Studies (BCARS), a Carnegie Corporation project. At BCARS he managed policy analysis, field research teams, workshops, and conferences on the Syrian refugee crisis in the Middle East, Turkey, the Balkans, the EU, and the U.S. He has also worked with the International Institute of Education in Amman, Jordan and Muscat, Oman, and with the Geneva Centre for Security Policy (GCSP).

This project collects and commissions case studies of urban settings (towns, cities or sub-areas of cities) in which refugees or internally displaced people have been living for more than two years.

The project has three components, each designed to give a different perspective on Sahrawi refugees.

Irbid, Jordan: A Case Report of Refugees in Towns

Irbid, Jordan is now inhabited by more Syrian refugees than Jordanian hosts. Yet the most profound changes in the city—affecting and being affected by refugees’ integration—are megatrends affecting cities the world over

Flights Above the Fray: The experiences and uncertain future of UNHCR’s family visit program for Sahrawi refugees

Between 2004 and 2014, UNHCR’s Confidence Building Measures (CBM) program helped more than 20,000 refugees in the Tindouf desert camps of Algeria to visit their families. This report gives a human perspective of the experiences of Sahrawi refugees and their families.