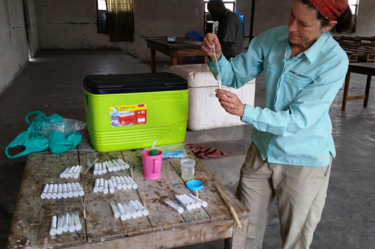 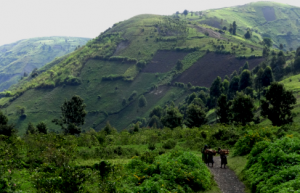 The nature of the research that the Feinstein International Center conducts means that we often have to collect data in remote settings under very difficult circumstances. Merry Fitzpatrick’s study on kwashiorkor (a type of malnutrition) in 2017 in eastern Democratic Republic of the Congo (DRC) highlights some of the challenges and how to overcome them. Merry had to measure about 1,300 children’s age, height, and weight; interview 300 households; and get two urine samples each from about 300 children so that she could gather evidence about how to design effective preventive interventions for kwashiorkor.

The villages selected for the study sat on the equator at an elevation of 7,000 feet in a range of mountains looking across a wide plain to the very active Mount Nyirangongo and Nyamulagira Volcanoes. The nearest city, Goma, was almost 2 hours away by motorcycle, through a national park that was not always safe. To ensure adequate access to the participating villages, Merry shared a house with some Congolese priests in Sake, a very small market town at the base of the mountains about 30 minutes by motorcycle from the villages. Sake had electricity for two to three hours, three nights a week during which time the team charged everything: computers, mobile phones, printers, lamps, etc. A pump in the courtyard provided water. The study team’s primary transport was a fleet of motorcycles organized and driven by a group of young rehabilitated ex-militia men because 4-wheeled vehicles could not access most of the villages 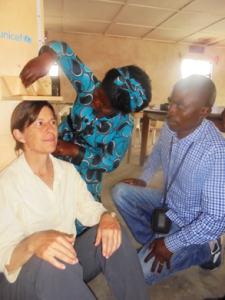 Merry Fitzpatrick pretending to be a child getting a height measurement.

The villagers were farmers and spent their days in the fields, so the teams needed to arrive early before the villagers headed out to work. The interview teams met in Sake around 6:30, downed a mug of fresh, rich buttermilk, and headed up into the mountains to do their interviews. They carried their tools on their motorcycles—scales to weigh children, boards to measure them, and a heavy bucketful of food models that they showed mothers to estimate diets.

While the interviews and child measurements were difficult enough to arrange, the collection, handling, and shipping of urine samples was an extreme challenge. The urine samples had to be collected first thing in the morning and right before bed, so the team had to convince and train mothers to collect the samples themselves at home rather than at a clinic. Getting villagers to agree to provide two carefully timed urine samples from their toddlers required enormous effort through trust-building, collaboration with village leadership, and a constant multi-pronged information campaign. 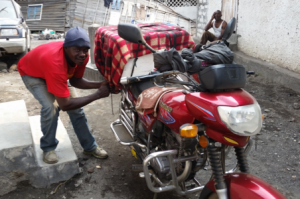 Once collected, the samples then needed to be refrigerated immediately and stored frozen until they could be shipped on dry ice. Coolers with ice were pre-positioned in the villages on the nights when the urine was to be collected for mothers to deposit the samples in. However, ice was not available in Sake and was difficult to find even in Goma, where the team eventually found it. They transported the ice to Sake in a rented van and then distributed it among coolers tied to the back of the motorcycles which took them up the mountain. The last leg of the journey for many coolers was on porters heads. In the morning, the teams collected the coolers and took the samples to Sake, where a precise amount of hydrochloric acid was quickly added to each. The samples were then whisked off to Goma in the back of the rented van. Half of the samples could remain “refrigerated” and would be tested in DRC. The other half need to be kept frozen solid on a long journey to a laboratory in the U.S. 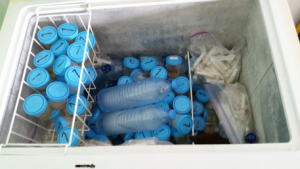 When the freezer and generator broke down, a PhD student triple-wrapped vials and stored them in the freezer of the posh UN home they were house-sitting.

Because dry ice is considered a hazardous substance and biological samples require considerable customs procedures, the samples had to be shipped using a specialist carrier. There were no international flights out of eastern DRC. The fastest way would have been to cross over land from Goma into Rwanda and travel on to Kigali, from where the samples could fly to the U.S. However, that border crossing was notoriously corrupt and the carrier refused to use it. Instead, the team had to pack the frozen samples in a large amount of normal ice and take them a couple hundred miles down Lake Kivu by boat to another border crossing. The samples then spent a night in a freezer that was connected to a dedicated generator. The following, morning the shipper arrived with the dry ice and shipping container and took them off the team’s hands. 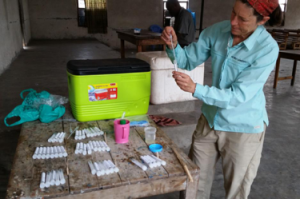 The challenges with the other half of the sample that did not require shipping were less dramatic but took just as much planning. Merry had to procure the testing kits from Australia before she left the U.S. and she carried them to the DRC in her luggage. Once in Goma, the kits had to be kept cold as much as possible, not an easy task when the city would be without electricity for weeks at a time. Merry also needed very concentrated sulfuric acid to use with the kits, but she could not bring it with her on a plane and could not find it anywhere eastern DRC. A team member had to travel to the capital of Rwanda, convince a large hospital pharmacy to sell him sulfuric acid and the jars for the urine collection, and then negotiate the acid back through the notorious border crossing. Setting up a makeshift laboratory, Merry was then able to do this particular test on the samples herself, avoiding the cost and trouble of shipping them.

In the end, the study revealed critical information (not yet published), which may change the way kwashiorkor is understood, potentially leading to new strategies to prevent it and more effective treatments to cure it. The study highlighted weaknesses in current nutrition survey methods that may underestimate how much kwashiorkor there is in the world. The study also found that a particular amino acid was especially low in the diets of populations with more kwashiorkor. The expected effects from a shortage of this amino acid match the broad array of symptoms of kwashiorkor, which can lead us to a better understanding of the different metabolic paths responsible for kwashiorkor – and hopefully strategies to prevent it.