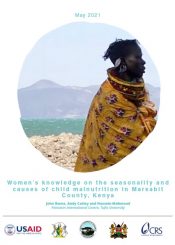 Women’s knowledge on the seasonality and causes of child malnutrition in Marsabit county, Kenya

This report presents the results of a participatory analysis of the causes and seasonality of malnutrition in children and mothers in North Horr and Loiyangalani wards in Marsabit county, Kenya.

Although North Horr and Loiyangalani  areas differ in terms of livelihoods, culture, and ethnicity, similar findings emerged from both locations.

Overall, women positioned the problem of malnutrition within a context of changing and gendered livelihoods, marked seasonality of livelihood systems, and physical remoteness with limited infrastructure or public services. These factors combine in ways which place women and children at a very high risk of acute malnutrition. Specifically, women described the following main causes of malnutrition for children and mothers:

The study involved a joint analysis with women using two participatory epidemiology (PE) methods: a monthly calendar and a causal diagram. Based on this analysis, participants were asked to identify their intervention preferences to address both child and maternal malnutrition. Learn more about the methods here.