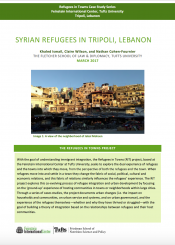 Tripoli, Lebanon: A Case Report of Refugees in Towns

This case study explores how the Syrian influx has affected Tripoli, with a focus on urban poverty, including how relationships between Lebanese and Syrians have deteriorated as competition over jobs intensifies, security concerns increase, and decrepit public infrastructure has been further strained. It highlights the responses of Syrian refugees and the Lebanese population, ending with some ideas about ways to improve employment prospects and economic stability.