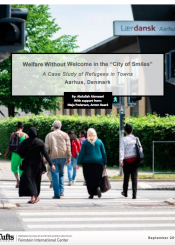 Aarhus, Denmark: A Case Report of Refugees in Towns

Aarhus is Denmark’s second largest city with a population of 336,411. The Refugees in Towns Aarhus case report looks at the integration experience of refugees within a Nordic welfare state. On the one hand, the welfare state provides services and support that may be unimaginable in many other urban displacement settings. On the other hand, the national debates and policies on refugees and immigration have become focused on restricting access and conflation of debates on refugees and radicalization.

How are refugees experiencing integration in this tension between welcome and welfare? According to the policies and procedures in place in Aarhus Municipality, refugees are assigned by the central government integration authorities from one of the official asylum centers in the country. When arriving at Aarhus Central station, they will be met by a municipal “integration officer.” The initial steps of enrollment into the municipal welfare system include receiving IDs to get the digital identity to opening a bank account to receive refugee-tailored social welfare transfers. Refugees arriving in Denmark are deliberately housed outside of neighborhoods with a concentration of non-western migrants.

The report is written by a long-time Aarhus resident and new Syrian refugee arrival.