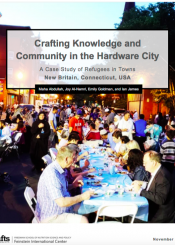 New Britain, Connecticut: A Case Report of Refugees in Towns

New Britain, Connecticut has a long history of immigration. This report focuses on the experiences of newly arrived Arabic-speaking immigrants and refugees from Syria, Iraq, Sudan, Yemen, and Morocco. The Arab population of New Britain has increased faster than other migrant populations over the last eight years, from 161 in 2010 to 733 in 2017. As of December 2018, there were approximately 260 Arabic-speaking families living in New Britain.