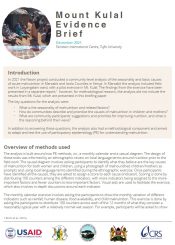 In 2021 the Nawiri project conducted a community-level analysis of the seasonality and basic causes of acute malnutrition in Marsabit and Isiolo counties in Kenya. In Marsabit the analysis included field work in Loiyangalani ward with a pilot exercise in Mt Kulal, which for methodological reasons were not included in that report. This brief presents the results from the Mount Kulal pilot.

The key questions for the analysis were:

The results showed child malnutrition increasing during the dry season. Participants largely attributed this to a decline in milk yields during dry spells. Although the agro-pastoralist groups harvest and consume crops from their own farms during the same period, this does not appear to have much impact on malnutrition or offset the reduction in milk available for consumption. Other key factors identified as contributing to malnutrition included lack of income, human disease, and women’s workload.

The results of this exercise were consistent with the findings from other participatory epidemiology (PE) studies in different pastoralist and agro-pastoralist areas. As such, it would appear that overall, the issues are similar for both communities even across fairly different contexts. Learn more about PE methods here.