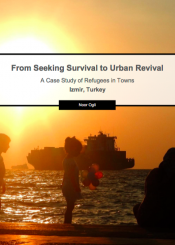 Izmir, Turkey: A Case Report of Refugees in Towns

This case report explores what happened when a coastal Mediterranean city in Turkey was transformed from a smuggling transit hub to Greece and the EU into a home for tens of thousands of Syrian refugees after the closing the Balkans Route in 2015. It shows how several of the city’s low to middle-income neighborhoods, especially the neighborhood of Basmane, have undergone increased demand for affordable housing and a revival of Syrian-owned small businesses. However, the city’s already limited healthcare and education systems have been further stressed by the increase in population.

The report is written by a Syrian refugee who attempted to travel to Greece, but whose boat sank, and she settled in Izmir becoming an aid volunteer.