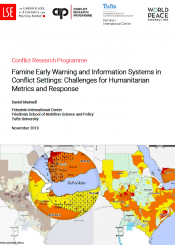 Attention to the growing number of people caught in crises characterized by extreme and often protracted levels of food insecurity, malnutrition, and mortality is increasing. The information systems that track these conditions and inform humanitarian decision-making have expanded substantially in the past two decades and in many cases have reached a degree of unprecedented sophistication. These famine early warning systems have become increasingly sophisticated in the past decade, but they still tend to be based on several assumptions that are important to understand. This paper briefly describes existing famine early warning systems and outlines some of the assumptions on which they are based— both in theory and in practice. Then it gives four brief case studies of recent famine or “famine-like” events and pieces together the formal analysis process with an attempt to reconstruct events on the ground from a conflict analysis perspective—highlighting the extent to which the formal famine analysis did or did not deal with conflict analyses and the political kryptonite around the discussion of “intent.” It closes with a summary of gaps in the current system and an assessment of the risks of trying to address those gaps through famine EWS or alternative means.