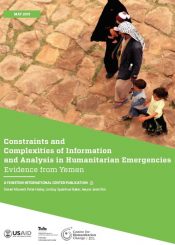 Constraints and Complexities of Information and Analysis in Humanitarian Emergencies: Evidence from Yemen

Since 2014, Yemen has been engaged in a civil war between the Houthi group and supporters of Yemen’s internationally recognized government. By the end of 2018, the UN estimated that 15.9 million people—more than half the population—were facing severe acute food insecurity and in need of immediate food assistance.

This report analyzes the challenges facing famine analysis in Yemen, including the Famine Risk Monitoring system recently put in place, and the integrated Phase Classification (IPC) system, used globally. The IPC is managed by a technical working group with the support of the food security and nutrition clusters and close involvement of the Yemeni authorities. Following the analysis, the report offers recommendations for ways to improve data collection and analysis on famine and famine risk in Yemen.

This report was jointly written by researchers from the Feinstein International Center and the Centre for Humanitarian Change in Nairobi. It was made possible by the generous support of the American people through the United States Agency for International Development (USAID). The contents are the responsibility of the authors and do not necessarily reflect the views of USAID or the United States Government.