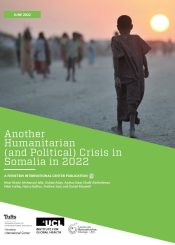 Another Humanitarian (and Political) Crisis in Somalia in 2022

Somalia is facing a humanitarian crisis of major severity and magnitude in 2022, following four failed rainy seasons, an on-going protracted conflict, and the impact of rising global food prices—the latter made significantly worse by the war in Ukraine and the disruption to global food and fuel markets resulting from that war.

This report compares the situation now to recent times that Somalia faced humanitarian crises and finds that many of the problems that this research team highlighted eight years ago remain today—and in some cases have gotten more serious. In particular, the humanitarian community’s ability to identify and reach the most vulnerable groups in Southern Somalia remains an unresolved challenge. These groups, defined primarily by Somalia’s clan system, suffered the highest levels of mortality in both the 2011 famine and the 2016-17 crisis. The report suggests ways of dealing with this problem, and with some of the related lingering issues facing humanitarian action in Somalia.