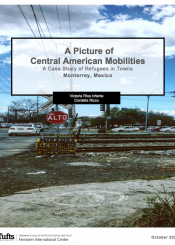 A Picture of Central American Mobilities

In this case report, Victoria Ríos Infante and Cordelia Rizzo, who grew up in Monterrey, Mexico, explore how their neighborhoods have been transformed as a home to migrants from across Central America. They explain how, while Monterrey is not a border town with the US, it feels like one. For decades, it has been an important destination of internal indigenous migration. In recent years, Monterrey appears in the conversation as a transit city for Central American migrants, but the truth is that for more than a decade, migrants from Central America have arrived, settled in, and built a life in the city.